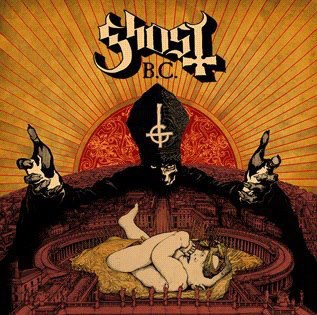 As most of you know I am a big heavy metal fan, I love all forms but some bands I could care less about the lyrical content as long as the music is good. I am not religious, I am an Apatheist which is the disregard for the belief nor the disbelief in a creator deity, essentially Agnosticism with a more pronounced "Don't give a flying fuck" point as there are more important issues in the world today. I tend to be pretty open, I love mythology and stories about ancient aliens and stuff like that so my music usually has bands that write about those topics on top of fantasy, love, life, nature, politics etc. I tend to avoid religious bands on both spectrums Evil/Good stuff as I really don't care, dont get me wrong religion has given us great music, art, stories and culture but it can also be a heavily dangerous thing, look at things like the Crusades, the Inquisition, Jihads et all to get my point. Now and then though there are a band that create such enjoyably kick ass music that I overlook the lyrics just for the music.

Ghost B.C. as they are marketed in the U.S. released their first album Opus Eponymus back in 2010 under the name Ghost, the album sent waves in the metal underground community for their live shows, lyrics and the music they play. Ghost B.C. (they claim the B.C. is silent so its just said as Ghost) play a heavily proto form of metal, now im assuming a lot of you have heard Blue Oyster Cult so imagine their music with a lot of organs and carnival music, now have the band wear robs and masks on stage with their singer Papa Emeritus II dressed as a satanic Pope, singing about Satan behind that you get the bands image. Come to 2013 where the band release their second full length album on a major record label Loma Vista Recordings (A sub-label of Universal Music Group) and it sends even more waves, now take into effect the band also managed to gain a spot at Coachella and the image takes off.

(I will anglicize the names of the latin tracks for meaning)

The music overall is a catchy rocky-pop metal outing, very 70's prog rock in aspect. The guitars have that 70's fuzzy sound, there are a lot of keyboards and organs, the vocalist has great pitch and the drumming is...fucking great to be honest. The album kicks off with the near 2 minute opening track Infesstisumam (Most Hostile), the first 30 seconds or so are just a church choir singing in latin about Satan and Hell then it kicks into a rocking track for the remainder. You know what you are in for after this for another 46 minutes, Infesstisumam leads right into Per Aspera ad Inferni (Through the Rough To the Grave) and kicks it off with a simple guitar riff for the initial 9 seconds then those drums and bass kick right in. The track has a very rocking feel to it, and Papa Emeritus II has one of the cleanest voices I have heard, its really soothing, and the lyrics are catchy as all hell. The next track, which was also the lead single off of the album, Secular Haze, kicks off with carnival music then the band fully catches up. Now it may have just been me but the opening guitar riff for Secular Haze reminded me of Opeth's The Drapery Falls in its execution so it threw me off quite a bit. After about a minute Papa begins singing, the chorus is catchy as all hell but other than that it is actually a weak track overall the drumming though is fan-fucking-tastic.

Jigolo Har Megiddo is the most flat out rock track of the album, and probably the best on here performance wise. The verses are catchy, the keyboards don't overpower the guitars and the drums and bass fill out the overall greatly. The chorus is hooky and short, and the guitar solo is REALLY freaking melodic, I was humming it as I was listening to it. After this we are followed with a two part song called Ghuleh/Zombie Queen, the first half of the song is a really soft piano led fare that reminded me a lot of some jazz acts, the second song is much more rocking and it threw me off at first but also became one of the strongest tracks on the album. Year Zero begins the first minute chanting various demon names then kicks into the verse, this song is atypical satanic song as the song is about the weakness of mankind and it will burn once the devil comes forth, the chorus is heavy and catchy so really listen to this one for that and skip it, this is the point of the album I skipped songs because I knew of what they were due to the song, Year Zero threw me off about that, it was also the second single off the album. After Year Zero we have Body and Blood, for the most part its a harmless song, its really a zombie song in essence but with the simple vocal hooks, the easy to remember verses and the really good chorus its again a really strong song, this one I sing as I love the chorus a lot.

Idolatrine is a mid-tempo rocker, the guitars are hidden beneath the keyboards and drums so its not really a stand out track, the second half of the song though is far better than the first half but its a bit boring, on this though you can hear some middle-eastern sounds in the music. I skipped Depth of Satan's Eyes due to the title and as I looked the lyrics up I got what I assumed so listen if you want. The technical final track on the album (the limited editions feature a cover of Abba's I Am a Marionette which is actually VERY fucking good, and a original song called La Mantra Mori which is roughly translated as The Death Chant but ill end with the regular end track) is Monstrance Clock. This one is actually a really good song, the songs rhythm has a very movement based feel to it, like its meant to be danced, could be me but it could be a DANCER HUH!? Nevermind. Anyway...

It's obvious Ghost B.C. play a style they like and write about Evil, Darkness and Satan. They have stated that it has been the intention to create really evil music with a pop style to throw people off when they realize that catchy hook they were singing was about the devil, if that was the bands true intention well fuck me it works. The gimmicks the band does though are a bit wearing, the main one is the hidden identities, all the actual musicians in the band are refered to as A Nameless Ghould and are given Alchemical symbols to differentiate them, Papa Emeritus is the only one who uses a name and even then "No One" knows who he is, its actually kind of an open secret on who he is though, and its surprising and is not. In Sweden where the band hail from there is a group for performing artists (bands, theater, etc.) called the Swedish Performing Right's Society which gives credit for writers and performers, all the bands lyrics are written by Tobias Forge, who under the Mary Goore name is also the founder of Swedish Death Metal legends Repugnant where he was vocalist and guitarist, but also had a alternative rock band called Subvision where he was vocals and guitars and his clean singing is IDENTICAL to Papa's. As the Society needs a real name behind a psuedonym Tobias publish the song and lyrics for Ghost B.C. under A Ghoul Writer. Repugnant has been on hold since 2010 when Opus Eponymous was released and Tobias has not had any real interviews to immediate knowledge.

Overall Infesstisumam is a solid Heavy Rock album, the drumming and vocals are among the most stand out of the music. Papa/Tobias has such a clean and solid vocal ability that its hard to remember what he's singing about, the issues that plague the album though is really the satanic aspects of it, I respect artistic integrity and wanton desire but whats the thing about it? Whats great about darkness, death and evil? Who knows, maybe its the taboo aspect of it, Anton LeVay spoke that his idea of Satanism was really about the independant nature of man, so maybe thats why its mankind being independant of the creator. But Humanism is that, its all the morals of religion but none of the bullshit so I have to deduct points on the superflous lyrical ideas, ive listened to death metal so I am used to songs about blood, gore, darkness, death but through that I also get politics, social issues and others so its not just the darkness about it, its about getting a message out that the world is wrong but there is still good in it.

The overall score I'll give Infesstisumam is an 8.5/10, the reasons are that the keyboards and drums overpower the guitars due to the fuzzy sound, the oft repeatable patterns in different songs and the lyrics but overall the album is solid Pop Metal, the darkness about it is what I love best though as the lyrics just throw you off if you sing them to yourself due to the catchy as hell vocal and chorus hooks, this is a reccommended pick up for any music fan, just turn your filter on and get rid of the satanic bullshit in life