For my first blog on my webs.com website (HURR DURR!) Well as per the title lets begin, OH BOY! Election 2012, closer than 2008's but still a wide margin obviously sided with Obama (I shall never call him "President" as it implies leadership when he shows none) than Romney but the defeat in the popular vote was a lot smaller than 2008's. For a rough comparison 2008's gap was almost 10 million more votes in favor of Obama to McCain with Obama at 69.8 million to McCains 59.4 million, also was the horrendous electoral college for that one, Obama recieved 383 electoral votes...while McCain with 173. This time though was more close in terms of the popular vote Obama had 60.3 million while Romney recieved 57.4 million (my numbers are always off, give me a break!) and Obama had 303 electoral votes, while Romney recieved 206, which say's one thing, Americans are slowly embracing conservatism again, VERY slowly.  The BIG issues this election year, such as the bad economy, Benghazi and civil rights were thrown to the wayside as both Obama and Romney attacked each other instead of focusing on the bigger issues, it almost was like watching two children in a park push and shove each other on which superhero was better (for the record, its Christopher Nolan's Batman).

You see, here in lies a problem of why I did NOT vote for either of those two, the avoidance of the big issues, I admit foreign policy is a big thing but both were essentialy saying the same the the other was saying! "I will increase military overseas" "I will continue drone warfare" "Iran will be dealth severley" only option they didnt say was how big each others dicks were (lets hope they NEVER do that, also no offense meant). Regarding foreign policy, if we want other countries to like us a lot more again one thing is to FUCKING COOL IT on the goddamn drone warfare, seriously!, out of 50 attacks, only two of them hit their targets, WAY TO MUCH COLLATERAL DAMAGE! We cant bring peace when we are attacking peoples weddings, school time and such. Before you go all "well then you didnt vote" AHH BUT I DID! You see most other countries see America as a two party system, well...we are, but its incredibly broken, but as such if you lived in every state minus Oklahoma there was one name under presidents that popped up, his name? Gary Johnson 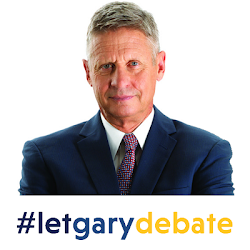 (Twice the executive experience of Romney, half the price of Obama!)

"Who's Gary Johnson?" I hear you ask, well Gary Johnson was the Libertarian Party nominee for President, he originally ran for the Republican ticket which, after media shunning, switch Libertarian and continued his message succesfully. Sure because he was third party he "never had a chance" well people claimed they wanted a third party choice, they got it, they ignored it and instead voted for more war, no debt management, increased surveillance, and destruction of our civil liberties given to us by the Constitution and Bill of Rights. I actually studied my candidates this year, I was a Republican in 2008 when I voted for McCain (one I do regret but Bob Barr was not a better option), after 08 I was pretty much independant agreeing with both sides but disagreeing with them on a lot, but in 2008 I discovered one person who changed me fully his name was Dr. Ron Paul, I was fully engrossed with his message and went with it, well go to 2012 and he announces he is running again, so I registered again as a Republican to vote for Ron in the primaries, little did I know about another candidate, Gary, who had the same message but possesed something Ron didnt have, humility. Well, go forward to August 2012 and Ron loses out on the nomination due to in-party manipulation, and illegal rule changing and the only liberty candidate left is Gary, I made full endorsement of Gary in May but said I will wait till the RNC for the nominee, well like I said it went to Tit R-Money. So I began active online support for Gary through Twitter, and Facebook, alienating my friends and getting him some more followers, a good result is all my close friends voted for Gary. Lets go to the 6th of November, I voted my conscience, Gary Johnson and VP nominee Judge Jim Gray get my vote. I return home to watch the returns, I knew Gary could not make the 5% he wanted, but knew deep down he would get more than most third parties recieve, we go to the 7th and I know Johnsons total vote count is 1,255,00 votes which is 1.1% of total votes, which said to me "We are the people sick of the lies, corruption, illegal wars, the drones, no budget, loss of civil liberties and the media". Yes, 1.1% of the vote is not a lot, but that officially is the Libertarian Party's best showing since Ed Clark in 1980 with 961,572 votes for 1.06% of the vote. Its the best showing for third parties since 2000 with Ralph Nader getting over 2 million votes for 2.1% of the votes.

Should I be sad Gary couldnt get to 5%, yea a bit, that means for the next election the Libertarian Party wont recieve federal matching funds, but at the same time if this momentum keeps up, and as the Republican Party dissolves due to a internal civil war, that means the Libertarian Party in 2016 may finally achiev something thats been a long standing dream, achieving a vote strong enough to become a major party and finally bring its message to a much wider crowd. I am a Libertarian, and I want whats best for all of us!